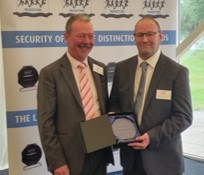 We are extremely pleased to announce that one of our colleagues has been awarded an ACS Pacesetters Security Officer of Distinction Award 2022!

Martin Wain from Templars Square Shopping Centre in Oxford has been recognised in these prestigious awards for his outstanding contribution to the security sector and has received one of 12 awards in a ceremony that took place at Windsor Racecourse on the 25th May 2022.

The awards set out to reward Security Officers who have gone above and beyond in their duties. The winners are selected by a panel of industry leaders and senior officers from all branches of the emergency services.

We would like to thank Martin for his outstanding contribution, not only to Westgrove but to Templars Square and the security industry as a whole.

This follows on from the success of last year with Martin’s colleague Majid Khan also being awarded this accolade. As a business we also nominated the following colleagues for their hard work and commitment over the past year and thank them for their continued support.

Ben Jaggers, Telford Centre went above and beyond to save the life of a member of the public who he believed was about to take their own life.  Through intuition, Ben recognised what was happening, through determination was able to prevent it happening and through empathy was able to comfort and support the person until professional help arrived.

Dave Phillips, Marketplace for his dedication to Marketplace for over 20 years.  Dave shows extensive knowledge of the site and his role and has fantastic customer service skills.

David Field, Ryemarket for providing lifesaving CPR to an unresponsive female during the pandemic.  David remained extremely calm, confident and in control of the incident and was able to bring the lady back to life.

Jake Quieros, Castle Quay, during an incident at an adjoining hotel, Jake was inspirational in the way he managed the situation outside of the hotel, liaising with hotel staff, police, the public and managing the situation in an exemplary manor.  Afterwards, during the team debrief, Jake recognised how the incident had affected his team and comforted, reassured and offered help and guidance.

Congratulations to all of our colleagues who were nominated for an ACS Pacesetter Security Officer of Distinction Award, you are all winner in our eyes. 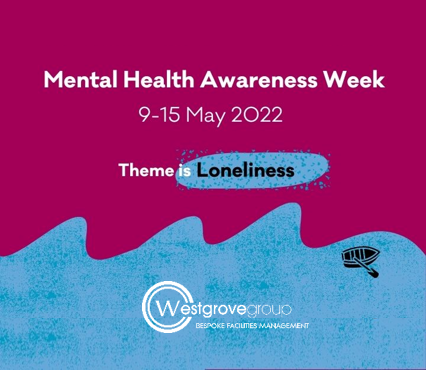 The Westgrove Group are continuing to support Mental Health Awareness Week. Hosted by the Mental Health Foundation, this year the theme is ‘Loneliness’.

The past couple of years have been incredibly difficult for many people, at home and at work.  Here at The Westgrove Group, we take the Mental Health of our colleagues and those around us very seriously. We’re taking this opportunity to talk about Mental Health and start the conversation with our colleagues.

This week we are providing our colleagues with a Mental Health Toolkit.  We want our colleagues to know that if they are struggling there are lots of ways they can reach out for support.

We have Mental Health First Aiders in the business and all Colleagues are offered Mental Health Awareness training via our e-leaning programme.

Through our partnership with the Retail Trust, our colleagues have access to free and completely confidential advice and support 24 hours a day, 7 days a week and access to the Retail Trust wellbeing portal where they can create their own personalised wellbeing toolkit.

We provide our colleagues with free access to the Mind Over Mountains charity who run events throughout the year.  Mind Over Mountains believe that time in nature, coupled with professional support is a powerful way to build resilience, talk without pressure and re-find stillness; restoring mental health, naturally.

If you are struggling with your mental health, we urge you to take the first step and reach out.

The Mental Health Foundation provide a list of charities and organisations that offer help and support directly to people with mental health problems – Click here.