Annual awards We are looking forward to this year’s Reward and Recognition Award Ceremony and to celebrating the achievements of our colleagues across the...

We are looking forward to this year’s Reward and Recognition Award Ceremony and to celebrating the achievements of our colleagues across the UK.

Held once again at The Village Hotel in Warrington on February 7th, this year’s event will include a welcome from our Managing Director Claire McKinley Smith, a company update from Brand and Development Director Laurie Barton Wright and a thank you from Company Chairmen Steve Fives and Simon Whittle.

We will hear about the latest security training in shopping centres and discover how a North West shopping centre is making strides to integrate with the local community.

There’s also a talk from Alder Hey Children’s Hospital, who we have been supporting this year, and news on our Mental Health Awareness Project. 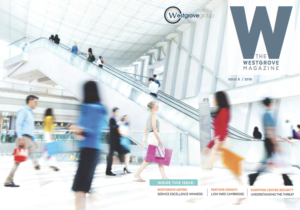 Keep an eye out for the new issue of the Westgrove Magazine which will be coming out in the next few months. As before, it will be packed with lots of company and people news.

You can look back at all our previous issues here.

Here are all our R&R Award winners for Quarter 4. Congratulations to you all. 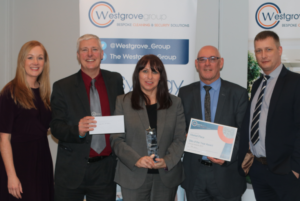 It’s not easy for a new manager to come in to an established site and continue to make a difference, but Gill has. Not only were her team the first centre to roll out the mental health NVQ training, the centre has held a mental health awareness week. She has also improved the cleaning element of the service with weekly cleaning audits increasing from 65% to 85% and is supporting our partner to achieve ISO14001.

Team of the Quarter – Haymarket

The Dual Service Team at The Haymarket Shopping Centre had a fantastic 2018 with numerous achievements. These include: Health & Safety (won the ROSPA Gold Award), Security (a fall of 62% in anti-social behaviour incidents), Corporate Social Responsibility (a new recycling scheme means the centre is now zero to landfill) and Customer Service. Centre Manager Tony Spencer received the 2018 Savills Mystery Shop Award after the centre averaged a score of 96%, the highest in the whole shopping centre portfolio.

Congratulations to John for his outstanding service to our customers and partners. His initiatives have included pro-actively checking over-door heaters in the shops to help prevent false alarms and unnecessary evacuations; making sure tenant owned loading bays and fire escapes are clean; and inspiring what has become a highly performing team of cleaners. Fantastic work.

CSR of the Quarter – Birchwood Park

Well done to the team for taking part in the site’s charity 5k fancy dress run. Special mention goes to Stewart and Paul who raised £140 for Alder Hey Children’s Hospital and Zoe’s Place.

Outstanding Act of the Quarter

We have many winners this quarter which include:

Three days after completing his counter terrorism training, James spotted a suspicious package outside the swimming baths during his routine checks. He instantly reported it to the control room, positioned his cleaning trolley to keep people away and closely monitored the situation. His swift and professional action in a very busy shopping centre was potentially life-saving.

Patrick, Anthony and Ashley were outstanding when a gang of 15 targeted the shopping centre during a night shift in late October. The gang smashed their way into the centre and two mobile phone shops with sledgehammers. Anthony and Ashley quickly contacted the CCTV control room for the town centre and called the Police while Patrick shouted to the culprits over the tannoy system that they were being monitored. Centre Manager Mike Flanagan thanked them for their quick thinking and excellent work.

Security Officer Brian trusted his gut instinct after seeing a man behaving suspiciously around the shopping centre. He contacted the Police who told him the man was wanted for previous incidents. When they arrested him, he was found in possession of a large kitchen knife. Outstanding work Brian.

Nathan bravely talked down a suicidal male who was seconds away from jumping off the top level of the car park – and stayed with him until the Police arrived to take over..

When Garry heard that a young girl had lost her money on the mall, Garry reviewed the CCTV footage to see what had happened. He discovered two women had picked up the money and were still in the area. He had a friendly chat to them and the money was given back to the girl.

Gavin, Matthew and John joined forces during an incident one November afternoon when an intoxicated man turned violent. They restrained him until the Police arrived, checked on the man who had been assaulted and swiftly dispersed the crowd who had gathered. The entire incident and arrest was captured on CCTV.

Clive was praised for his response to a call from a mobile phone shop manager who had noticed illicit images on a customer’s mobile phone. The Police were called and the man was arrested.

Patricia’s quick thinking while on a security patrol prevented a shoplifter from making off with stolen goods from a department store.

When a passenger on a flight took ill, Dave ensured the team were briefed on what to do until the paramedics arrived. The DSAL Airport Duty Manager commended Dave and his team for their support during a very difficult situation.

Many thanks to David and Stephen for helping a lady who had collapsed in one of the centre’s cafes and needed her inhaler. They used their First Aid training to make her more comfortable and called for medical help. The lady later sent a thank you card for their help.

David rushed to help after reports that a lady was attempting to commit suicide in a nearby car. He got her out of the car, put her in the recovery position and controlled the situation until the emergency services arrived.

Steve and Ray bravely dealt with a gang of teenagers running amok in the shopping centre throwing bottles and armed with a knife. They calmed the situation down and removed the youths from the premises.

Alex was praised for his help after a break-in where a number of computer monitors were stolen. Keen-eyed Alex found a smashed computer monitor which the Police are interested in for fingerprints.

Richard quickly called for help after spotting a distressed woman at the top level of the car park. Both himself and Majid calmly talked to her until help arrived.

Mike and the security team were praised for their First Aid help and support after a man was seriously assaulted and injured outside the shopping centre. Fantastic work.

Again we have a number of great nominations:

The Store Manager of White Stuff wrote to thank Stan and Rob for responding quickly to their requests for help with a distressing situation involving a customer with complex mental health needs. They were praised for their empathy, calmness and reassurance. Well done both.

The team won praise for their help with a bubbly young lady with special needs who visits the shopping centre daily. She feels safe whilst in the centre and is touched that the security team go out of their way to make sure she safely gets her transport home. Great team work.

Paul was on a night shift when he spotted a man acting suspiciously around the centre and then breaking into one of the nearby flats. He immediately called the Police and kept monitoring the situation so he could lead them to where the man was hiding. A great example of an officer ensuring the safety of the centre and the local community.

James was on duty when he heard water from inside a service lift. He reported it to the technical services manager who investigated and found a burst pipe in the plant room. If it had not been spotted so quickly, it would have caused thousands of pounds worth of damage. Great work James.

Iain and Dave summoned all their mechanical skills to fix an elderly gentleman’s mobility scooter which had broken down at the mall. The man, who had been quite distressed because the scooter gave him his independence, was delighted with the results. He has been back since to tell them that the scooter has never worked as well!

Special thanks to the entire security team who have taken it in turns each day to patrol the centre in plain clothes. It has resulted in the detention of nine shoplifters and numerous deters. An outstanding act by the whole team on the floors and in the control room.

Praise goes to Alex who helped a family of four visiting Liverpool from Norway with their travel arrangements. By mistake, the family had booked the wrong train tickets to London and were set to lose the £250 cost. Alex stepped in to help, negotiated with the train company and changed the tickets at no extra cost. His support and compassion towards the family left a lasting impression on them and their visit to the centre, the people and the city of Liverpool.

Well done to Jeanette for her fabulous customer service skills and for her happy, caring nature. Several times a week – and for a number of years now – she assists a blind gentleman who visits the shopping centreto make sure he is OK. She always goes above and beyond.

Majid was nominated after he helped a woman in a wheelchair who was having a serious panic attack. He stayed with her, calmed her down and helped to find the friend she had lost. Fantastic service excellence Majid.

Mrs Fiona Quirk contracted us after she received assistance from the team for her brain-damaged son. She said that she had not been on holiday for eight years due to concerns about getting her son through the airport processes. She praised our service and Jane for her fantastic manner with her son. They had such a positive experience that they are now confident in booking future family holidays – but only from Doncaster.

Daanyaal showed excellent customer service skills after stepping in to help support an Odeon manager who needed extra man-power to cope with a group of troublemakers in one of the screens.

Steve received excellent feedback from a confused customer who thought she had lost her car or that it had been stolen. Steve helped to search the car park and quickly found it for her.

Alistair helped a young lad flying home alone after a leg operation. When the boy was sick on himself, he was told he would not be able to fly. Alistair cleaned him up, helped him change his clothes and made sure he made the flight back home to his family in Ireland.

Martin not only engages with his local community, he knows, supports and helps them too. Recently, he stepped in to make sure that an elderly local man got the medical help he needed after he became concerned about his failing health. The man later thanked Martin for his care and said he was getting the treatment he needed – all thanks to him.

Do you know anyone who might be interested in working with us? Let us know and, if they are successful, we will reward you with £100.

‘Colleagues of Tomorrow’ is Westgrove’s ‘refer a friend’ scheme, which means that for every friend that you refer to us, and we recruit, we reward you with 100* to say thanks!

It’s just a great way of speaking to people interested in joining us and rewarding the colleagues who already work with us.

If you have someone in mind you think would be great for our business, please send an email to Recruitment@Westgrove.co.uk quoting ‘Colleagues of Tomorrow’.

*£100 is payable on completion of a 6-month probationary period.